Chatwin’s Guru and Me 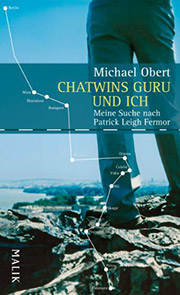 Generations of travelers have idolized him.  To Bruce Chatwin, he was the “last guru.”  And Michael Obert, himself a modern nomad and writer, follows in the footsteps of the oldest, still writing vagabond: Patrick Leigh Fermor.

In 1933, Fermor takes off on foot from Rotterdam to Istanbul. Seven decades later, the legendary journey of his idol becomes the beginning of Obert’s own journey.  When he discovers that the nearly hundred-year-old Englishman is supposedly still alive, he sets off to track him down—a pilgrimage with an uncertain end.

Obert travels from Berlin via Vienna to Bratislava, through Hungary, Serbia, Rumania, Bulgaria, Macedonia and Albania before reaching the southern Peloponnese.  Along the way, he gets to know what is, for him, an unfamiliar part of the world.  His encounters become part of a portrait of Eastern Europe that is as personal as it is poetic.

But the question remains: Will he find his mentor?

“In the greatest tradition of sophisticated travel literature.”
(DIE ZEIT)